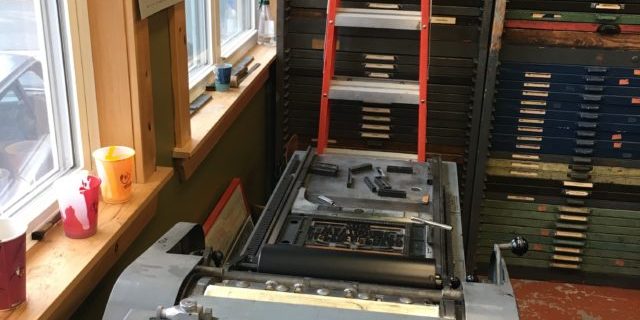 Gaspereau Press describes itself as one of Canada’s ‘most innovative and tenacious literary publishers.’ Just shy of twenty years old, it has been voted Best Small Press Publisher in Canada three times, and its books have won the Giller Prize and the Governor General’s Award.

Since 2000, Gaspereau has been hosting an annual Wayzgoose, which traditionally was an annual party thrown by a master printer for his workers. In more recent times, the event has become a celebration of printing and publishing in general.

For the last few years, Gaspereau has incorporated a Writers’ Salon into its annual Wayzgoose to celebrate the work of some of its writers. This year’s Salon was held at Wickwire House in Kentville, Nova Scotia, on October 22.

The Gapereau writers featured this year were all poets: Matt Robinson with some nights it’s entertainment; some other nights just work; Carmine Starnino with Leviathan; and Erin Brubacher with In the Small Hours. Monica Kidd, another Gaspereau poet, hosted the event to share. This recording first aired on VOBB radio on Monday, Oct 31. (Get comfy, it’s 52 minutes long!)