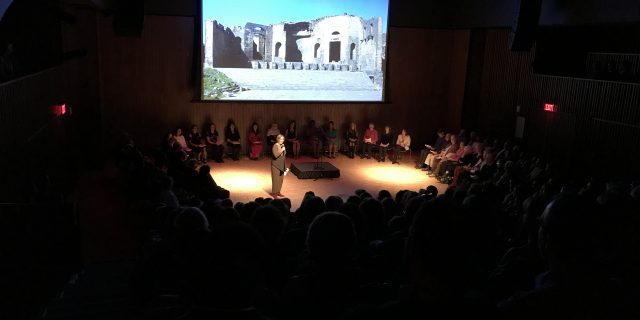 Every woman knows the power of a good pair of shoes, right?

While the old cliché hints at shoes as a symbol of vanity, there is a unique literacy program in Canada that builds on the bond between women and shoes as a way to allow more women’s stories to be told.

The Shoe Project has been running in Canada for 14 years. The brainchild of novelist Katherine Govier, it evolved from a gift of money from an unnamed patron into a national institution for women’s literacy and storytelling. Women who are new immigrants to Canada are invited to write a story about a pair of shoes and how it relates to their long road to a new life. The women are then mentored over several weeks and coached through drafts of their stories. They also receive coaching in performance.

Then at the end of the session, they get up on stage and read their story in front of a crowd, in English. The Shoe Project started in Toronto, went west to Calgary, and is making its way east, with stops in Halifax, Fredericton and Charlottetown.

This year’s Calgary Shoe Project performance took place on Jan 21, at the brand new National Music Centre, on the second anniversary of the Women’s March on Washington. It was part of Calgary’s long-running One Yellow Rabbit’s High Performance Rodeo theatre festival, and was a sold out show.

The evening and the readers are introduced by performance coach Denise Clarke. You will also hear from Shoe Project founder Katherine Govier, and participants Choden Tenzin of Tibet, Catherine Enstas of Syria, Noriko Ohsada of Japan, and Dusanka Reljic from the former Yugoslavia. Music courtesy of Aya Myana of Syria, playing the oud.

This first part of the 2018 performance of The Shoe Project originally aired on vobb.org on Monday, January 29, 2018.