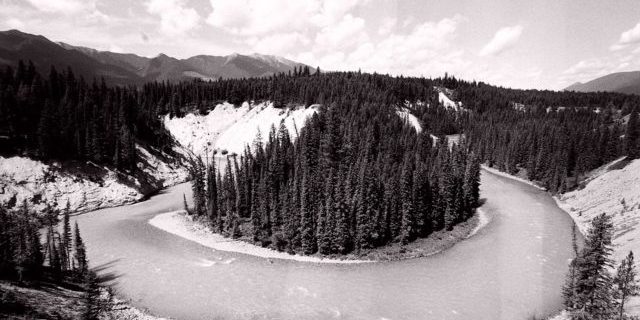 This post marks a new chapter for curiaudio. After a 12-year hiatus from radio (aside from the occasional cameo appearance), I am returning to my roots in community radio and have embarked on a series of documentaries for Voice of Bonne Bay (95.9FM, 98.1FM in beautiful Gros Morne National Park), and worldwide on www.vobb.org.

The Ripple Effect is a reflection 10 years after a canoe trip I took on the Kootenay River when a cedar tree crashed down on me, breaking my back and knocking me out. I recovered and am in good health now.

But a ten-year anniversary of a near-death experience begs reflection: is there a clear narrative of lessons learned?… how might things have been different?… how should one feel after getting a second lease on life? Grateful? Humble? Lucky?

Instead of finding answers to those questions, when I sat down to reflect, I found myself thinking about rivers. Here you will hear the voices of my kids, as well as music from K2, from the album Blue Dot Sessions (available from Free Music Archive). You’ll also hear a passage from Miriam Toews’ Swing Low a Life and from Wind in the Willows, by Kenneth Grahame.

The Ripple Effect was originally broadcast on Monday, July 18 at 8pm Newfoundland time.